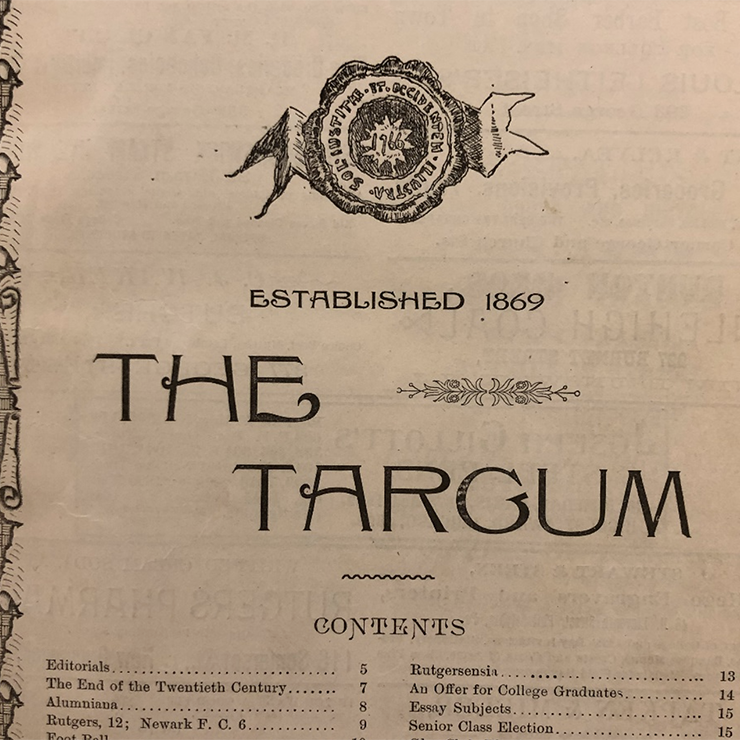 Some University historians indicate that the Targum was first published as an annual in 1867, but of this we have no extant evidence. In January 1869, the Targum as we now know it, made its appearance as a monthly paper that concerned itself with student “literary contributions” and college news as well as serving as a vehicle for bringing news to alumni and the general public. As the newspaper evolved, it chronicled events on campus at Rutgers University but also reflected the news and the spirit of the times from New Jersey to the world.

The newspaper, which originally was for sale, varied in frequency over the years as did its title (The Targum, Rutgers Targum, Rutgers Daily Targum, and Daily Targum). The newspaper has continuously been published since 1869 with the exception of nineteen months during the second world war between February 1944 and October 1945. The Targum was published by the students of Rutgers College, and later Rutgers University–New Brunswick represented through the years as the Targum Association, Rutgers Targum Association, and Rutgers College Targum. As a student organization, the Targum operated under the oversight of the dean of students and student government but in October 1980, the Targum became an independent college paper.

Researchers can access the newspaper via microfilm from 1980-1987 and in hard copy from 1987 to the present in the Special Collections and University Archives reading room.

The digitization and preservation microfilming of the Targum has been made possible by the generous support of Targum alumni and the Rutgers College Class of 1966.

The Targum has varied in size and paper quality from 1869 to the present and these originals are housed, both bound and loose, in Special Collections and University Archives. The Targum was originally microfilmed as part of a state-wide initiative in the late 1980s but the quality was uneven. To ensure preservation for centuries into the future, the University Archives has created preservation-quality microfilm in three generations: archival master negative, print master negative, and service copy. The digital surrogates of the Targum have been generated from the print master negative.