New Jersey Health Statistics from 1877 to 2000: An Historical Electronic Compendium of Published Reports 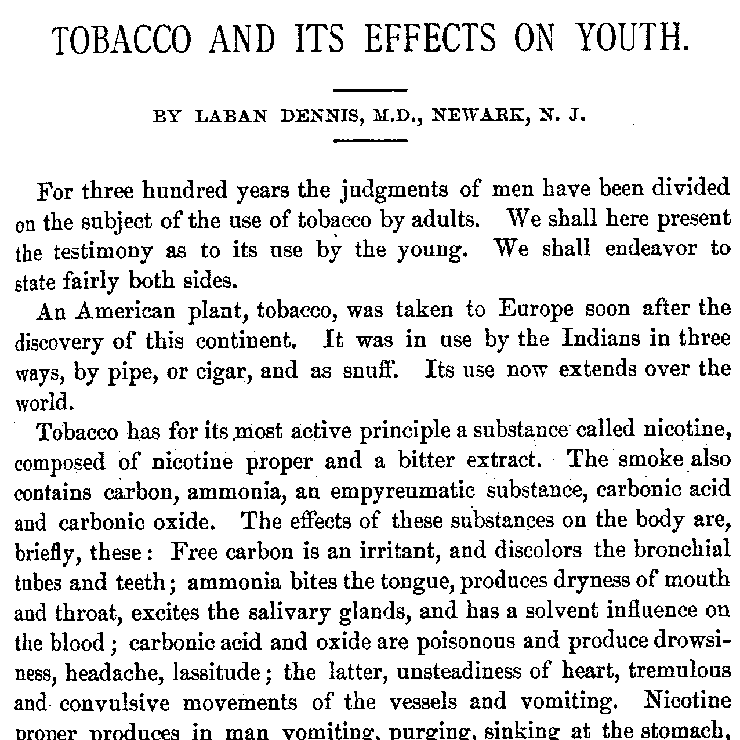 This compendium is an enormous archive of official annual reports on the health of New Jersey, including extensive compilations of population-based health statistics, which covers over 45,000 pages of original content in the 141 separate documents that it incorporates. Spanning three centuries and the entire series of printed documents from 1877 to 2000, all of the original reports had been initially prepared as government publications. The printed reports were then distributed to interested individuals, governmental agencies, other organizations, and libraries throughout the State. Continuing the long tradition of making the latest information on health statistics available to the public, this compendium now provides free and convenient electronic access to facsimile copies of the original reports through PDF files containing over 27,000 pages. Because of the deteriorated condition of some of the early reports and the fact that there is apparently no other complete set of the reports available in the State of New Jersey, this electronic collection also seeks to preserve the content of the printed documents in forms that can remain accessible well into the future. 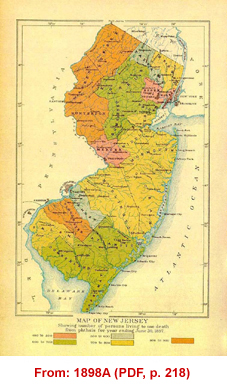 Being among the first systematic publications on public health systems and health statistics in the United States, the New Jersey reports offer fascinating glimpses into pioneering efforts to deal with diseases such as smallpox, anthrax, and influenza that have recently re-surfaced as global concerns. In addition, with extensive narratives and other information (e.g., organizational charts, tables, graphs, and complete texts of some laws), the entire series provides valuable insights into the administrative aspects and legal bases of the public health system that emerged over time in the State. Written in non-technical styles that are easy to comprehend, many sections of the early documents are especially well researched, often reflecting both international and historical perspectives. The reports also contain many highly detailed descriptions of the consistent collection of data across time and geographic areas. Therefore, the reports provide many examples of time series of health events (e.g., mortality rates for specific diseases over a period of years) and the steps taken to address those issues that continue to be relevant to present-day efforts to plan, develop, and implement effective public health interventions, including several early references to health disparities and outbreaks of influenza (particularly the 1918 pandemic).

Tracing its origins to a 1999 course in epidemiology in the Public Health Program at the Richard Stockton College of New Jersey in Pomona, the development of this compendium was based on the authors' knowledge of and direct responsibilities for the preparation of some of New Jersey's recent health statistics reports while employed by the New Jersey Department of Health and Senior Services. Although paper copies of only a small subset of reports for decennial (i.e., 1880, 1890, etc.) and recent years were included in that first course for end-of-semester presentations, students soon commented on the fascinating details and extensive narratives found in the early documents, especially with respect to concerns about environmental health in general, and sanitary regulations in particular. Copies of the health statistics reports for other years were gradually introduced into subsequent epidemiology courses not only at Stockton but also at the University of Medicine and Dentistry of New Jersey (UMDNJ) - School of Public Health. Eventually all of the original reports were copied, including electronic versions of some pages of early reports with color maps/graphs or oversized tables obtained through the assistance of the New Jersey State Library in Trenton. Although this compendium seeks to preserve the content of the documents as originally printed, it does not duplicate their formats precisely.

The 141 PDF files found in this compendium have been grouped here into seven lettered series to reflect the chapter emphases and other organizational details (e.g., authors, review processes) of the original reports. The seven series are briefly summarized in Table 1, followed by some additional notes and volume details about the individual reports. Utilizing JAMA, APA, and NEJM styles for the citations, three versions of a bibliography for the original reports are also available in conjunction with this collection.

Series A. Covering the years from 1877 to 1969, this series includes 92 annual reports of health and health-related data and statistics, each with an index and including extensive narrative reports on various topics and programs, with an average of over 409 pages. [Note that, because of the use of 5½ by 8½ formats in this series, many facing pages could be copied as single sheets, resulting in the PDF files typically having fewer pages than their corresponding original documents. Also note that without its own report, information for 1918 is found in the 1919 report.]

Except for the initial 1877 report, which was not numbered, both the report number and the data year appeared in the titles of the remaining reports in this series. Thus, although there were six similar variants of titles utilized prior to 1915, the title of the 1915 report and of all of its 53 successors is typical of most of the documents in Series A (i.e., "Thirty-ninth annual report of the Department of Health of the State of New Jersey. 1915").

Series B. Spanning the data years from 1962 to 1978, this series includes 17 annual reports of health statistics consisting primarily of tables and with the "New Jersey State Department of Health" as the corporate author. The first eight years in this series (i.e., 1962-1969) overlap with reports for those same data years found in Series A. Although originally intended to provide separate tables of statistical content, the reports in this series are considerably shorter (with an average of 115 pages) than those in the earlier series. While no longer using report numbers in the titles, consistent titles appear throughout this series (e.g., "New Jersey Health Statistics. 1962" for the report on the 1962 data year).

Series C. This series covers the three data years from 1979 to 1981 and is comprised of 11 annual reports of health statistics for specific, single types of health data (i.e., marriage, birth, mortality, and abortion) consisting primarily of tables. Although having the same corporate author and other similarities in the content of the tables (with some additions) as the documents in Series B, the reports in this series use distinct letters at the ends of the PDF file names and separate names in the titles to denote the single types of health data: "A" for marriage; "B" for birth; "C" for mortality; and "E" for abortion.

Series D. For the data years from 1982 to 1988, the seven annual reports of health statistics in this series consist of mixtures of text and tables on a variety of topics. Prepared for use in three-ring binders, the reports contain several sections for the various topics. Each section is identified by a lettered "tab" to facilitate access to its title and contents and is numbered separately using its respective letter.

Although the corporate author ("Center for Health Statistics") and the publisher ("New Jersey Department of Health") differ from those for Series B, the titles of the reports remain essentially the same (e.g., "New Jersey Health Statistics. 1982" for the 1982 data year). However, the original documents in this series are considerably longer (with an average of 372 pages) than the reports in the preceding two series.

Series E. Covering the data years from 1989 to 1997, the nine annual reports of health and health-related data and statistics in this series consist of mixtures of text and tables on a variety of topics, a similarity to the reports in Series D while the lengths are considerably shorter (with an average of 188 pages). In addition to returning to the practice of binding reports much like those in Series A, other major innovations of this series included its: emphasis on tracking New Jersey's progress in meeting the State's health objectives; greatly expanded data quality review procedures; and recognition of the individual authors actually participating in the preparation of the original documents. [Note that Rose Marie Martin was the first author of all nine reports in this series.] 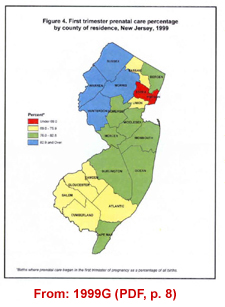 Although the name of the publisher changed to the "New Jersey Department of Health and Senior Services" beginning with the 1993 report, the titles of the reports remained unchanged from those used in Series B and D and were also carried over to the two subsequent series (i.e., Series F and G). Because data found in the 1993 and later reports (i.e., also including the reports in the two subsequent series) are now available electronically, it is suggested that users primarily interested in receiving the latest statistical content (including any available updates and corrections) from those more recent data years download the desired sections directly from the New Jersey Department of Health and Senior Services, Center for Health Statistics website. [Note that, with commitments to free public access to the latest information, the current compendium and the website both treat the content of the reports as government publications.]

Series F. With a length of 238 pages, this single annual report of health and health-related data and statistics for the 1998 data year also includes mixtures of text and tables on a variety of topics and is generally quite similar to the reports in Series E. Although employing analytic methods and review procedures sufficiently different from those found in the nine reports that immediately preceded it to merit designation here as a new series, this single report continued the emphasis on tracking New Jersey's progress in meeting its health objectives that had been introduced in the earlier series.

Series G. Covering the data years of 1999 and 2000, the two annual reports of health statistics in this series consist primarily of summary tables. Because of advances in making many of the data tables electronically accessible through the website mentioned above, these two reports are dramatically shorter (both with 20 numbered pages) than those in any of the six earlier series. More importantly, with a decision to make subsequent reports available only through the website and not in paper forms, the two reports in this series represent the final appearance of printed documents as part of a collection of New Jersey health statistics reports that dated back to the 1877 data year.