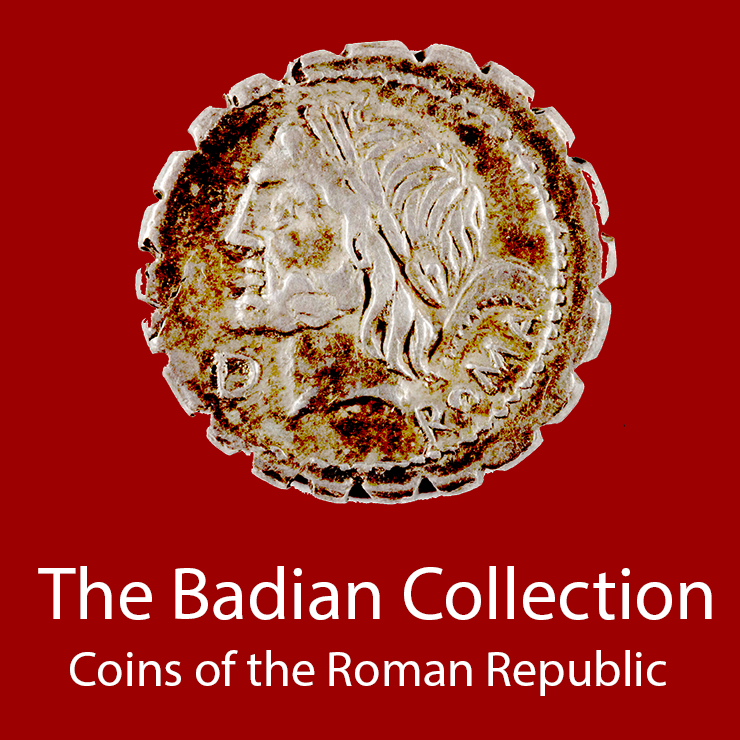 One of the goals of the Badian Collection digitization project has been to explore various ways to produce digital proxies of numismatic objects, in order to optimize both preservation and presentation. And so while most records in this collection feature photographs of the obverse and reverse sides of their subject, some of the earlier records feature coins which have been photographed from multiple angles in order to provide a sense of volume and depth, and to enhance the user’s proxy access to the object itself.

In the fall of 2017, Rick Hale and Aaron Hershkowitz, two PhD students in Rutgers’ department of Classics, undertook to produce digital proxies of several coins in the collection using the process known as Reflectance Transformation Imaging (RTI). With the support of Rutgers University Libraries’ Digital Humanities Lab, and an award from New York City Digital Humanities (NYCDH), a selection of coins were chosen and photographed using this process. The goal of this project was to explore the usefulness as well as the practicality of RTI for documenting and displaying numismatic objects in a library collection.

From the project proposal:

“Advances in digital technology, both in terms of imaging and display/transmission of data, stand to significantly democratize subjects that had previously been restricted to the relatively small number of experts with the funding and connections to directly examine centrally relevant pieces of realia. Moreover, given the increasing emphasis in pedagogy on direct encounters with ancient materials and primary texts, we consider that this Digital Humanities project will be of particular benefit to the collection and its users. There is, however, always a balance to be struck between the cost of digitization/publication in money, time, and bandwidth, and the added value for research, teaching, and general interest provided by the new documentation format. “

Primary research questions, then, were:

The software used in RTI imaging was developed at Hewlett-Packard Labs by Tom Malzbender and Dan Gelb, as a texture-mapping tool. Using computational methods, RTI composites data from multiple digital photographs shot from a stationary position of a single object, using different light positions. Using the light information from each shot, a model of the surface is mathematically synthesized which allows the user to manipulate light position, color information, and other surface features to render a 3-dimensional approximation in a 2-dimensional environment. More details about RTI, and links to downloads and documentation, can be found at Cultural Heritage Imaging (CHI):

From the Badian collection, 22 objects were selected which, it was thought, could benefit most from, or be most typically demonstrative of, the kinds of results one could derive from RTI imaging. Although RTI can be carried out by hand, it is faster by a factor of at least 10 if a dome containing fixed lights is used, so that light position changes can be both uniform and automated. Therefore, a dome containing 48 LED lights was constructed to conduct principal RTI photography. The dome and operational setup which was assembled for this project can be seen in the image on the right.

Design of the dome was based on the model found here.

Each object was imaged, obverse and reverse, in the RU Libraries Digital Humanities Lab:

RTI imaging and production was completed in the Fall of 2017, and results shared with Rutgers University Libraries. Hale and Hershkowitz intend to publish their project results and observations in the near future. Links to the completed RTI files are available for download below. 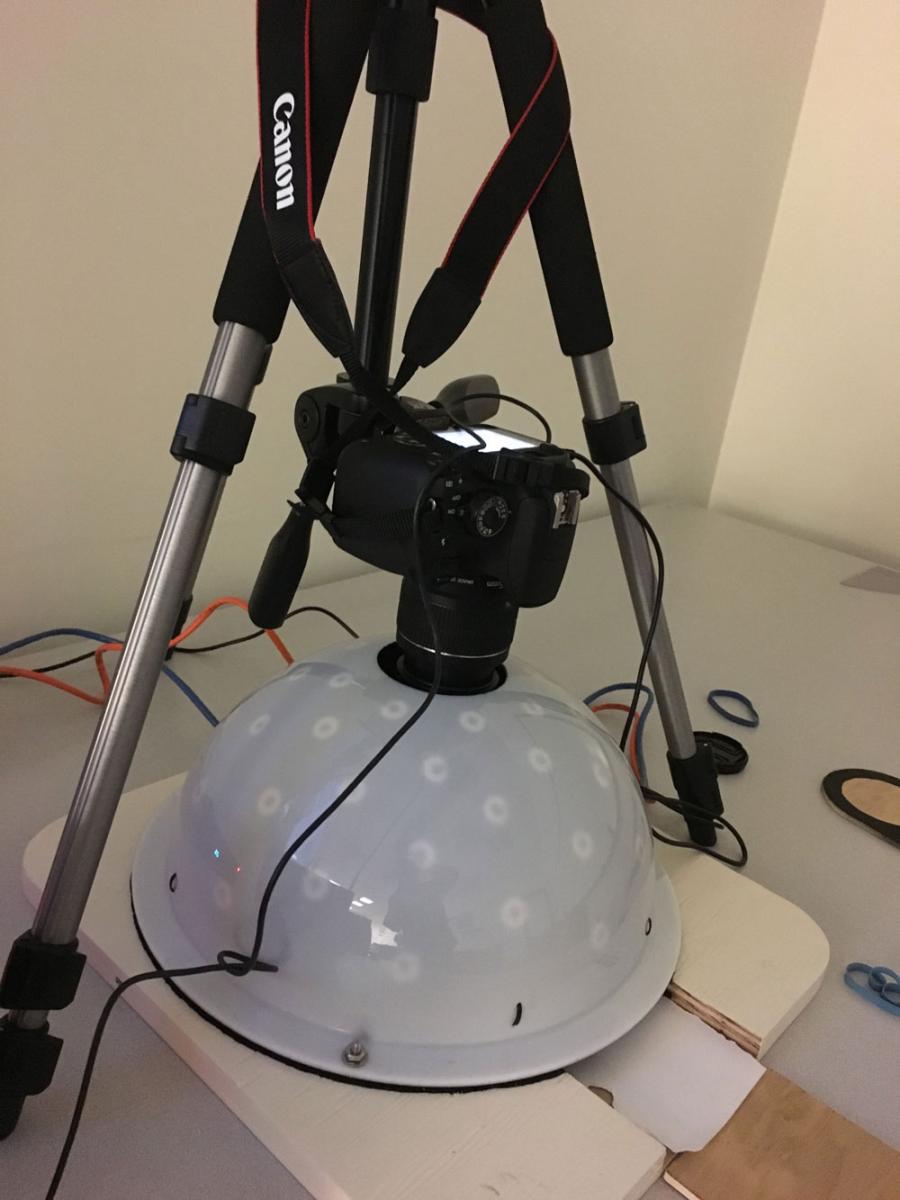 The following images demonstrate the general production setup that was used, situated in the DH Lab: 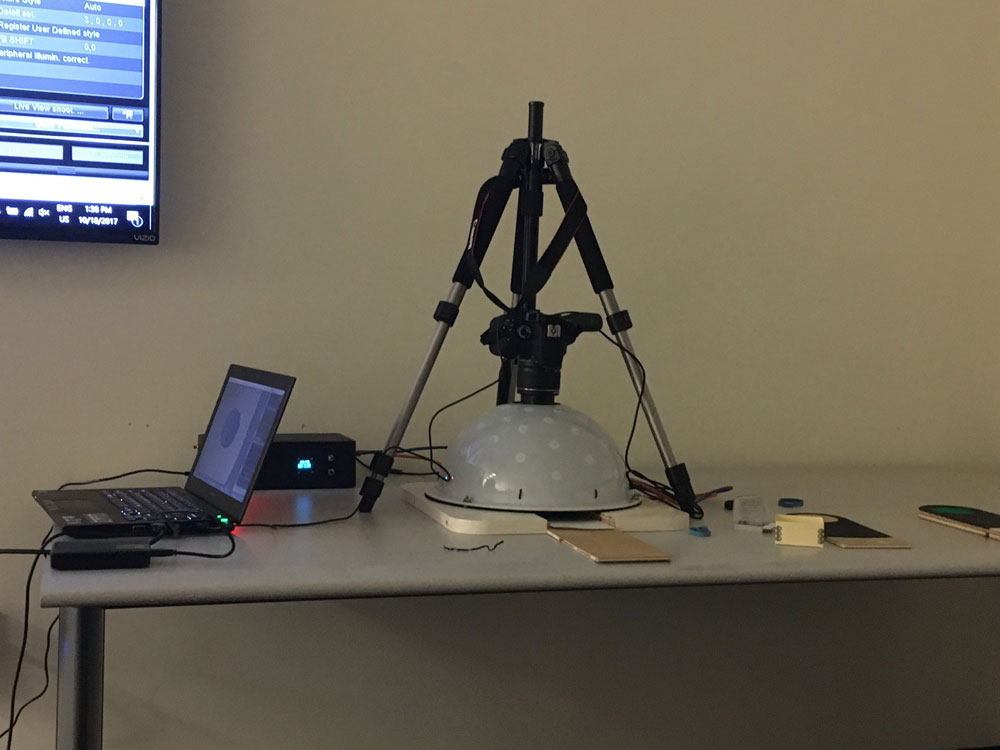 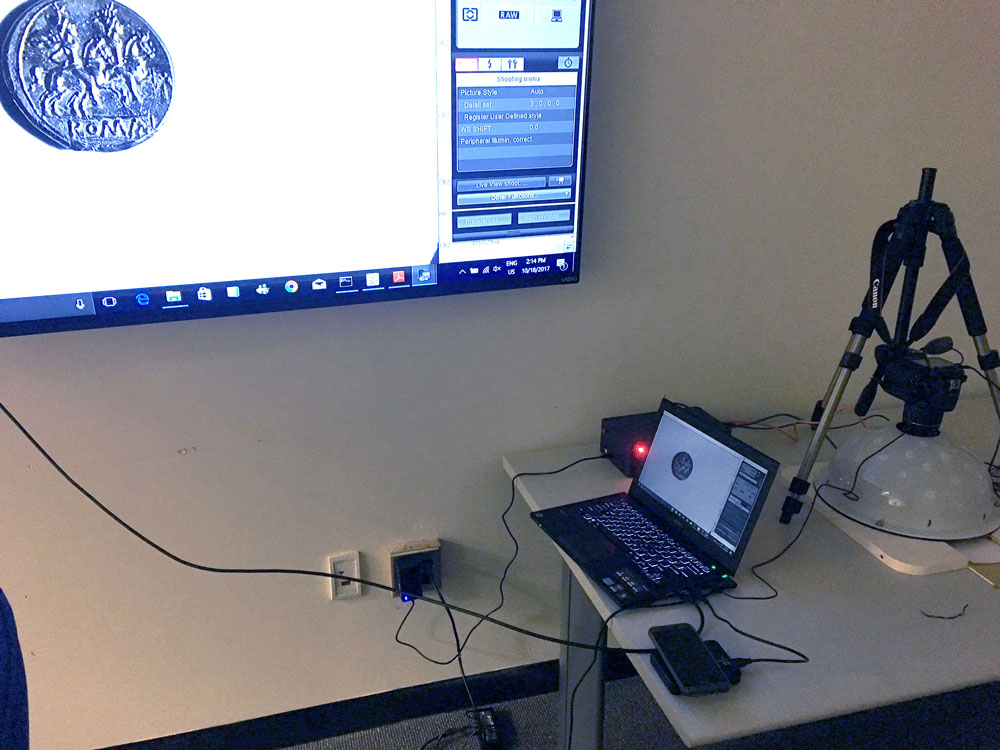 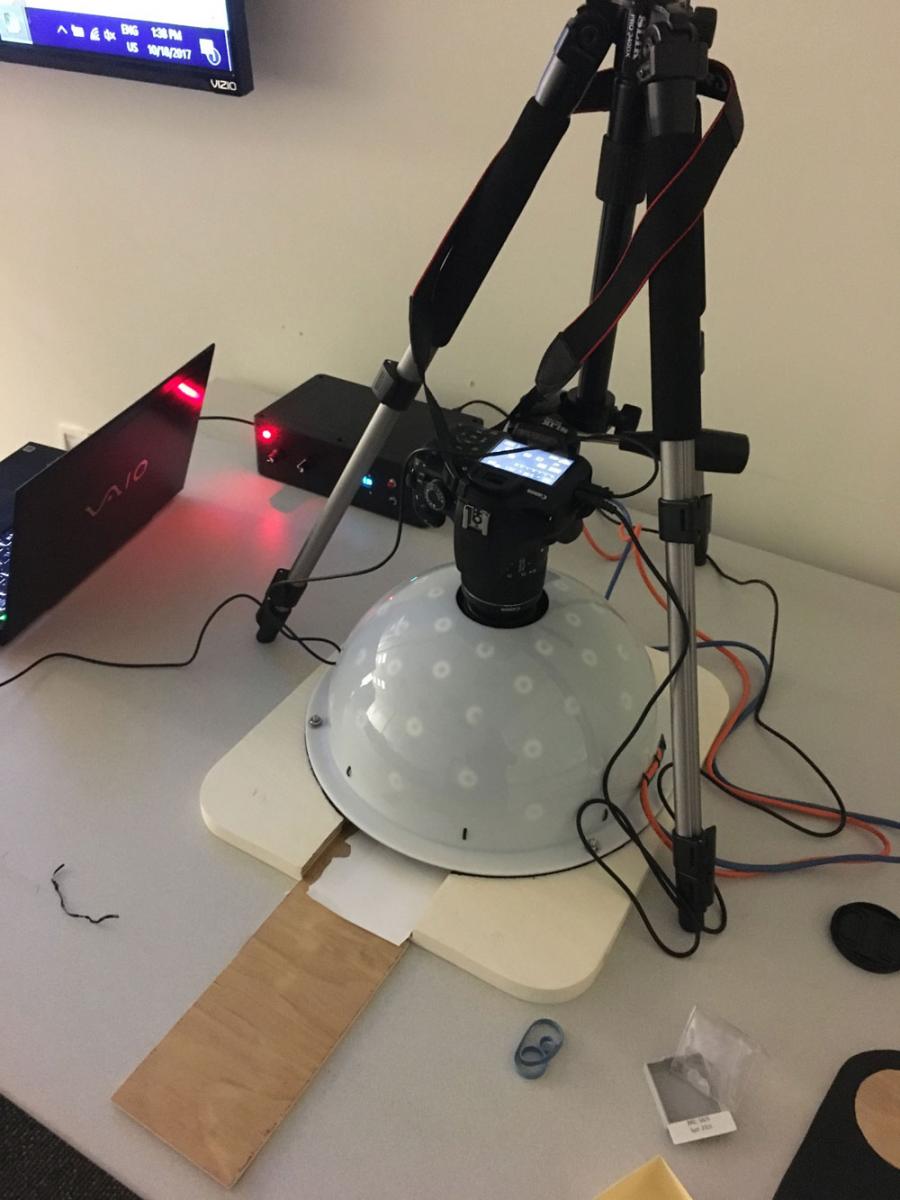 RTI files allow the user to manipulate the direction of a light source over a statically-placed image. By this means, the user can examine features of relief and surface details which might be rather obscure in a static image.

The following image is an object (BAD0002) as represented by a static photograph in the Badian collection (full record here): 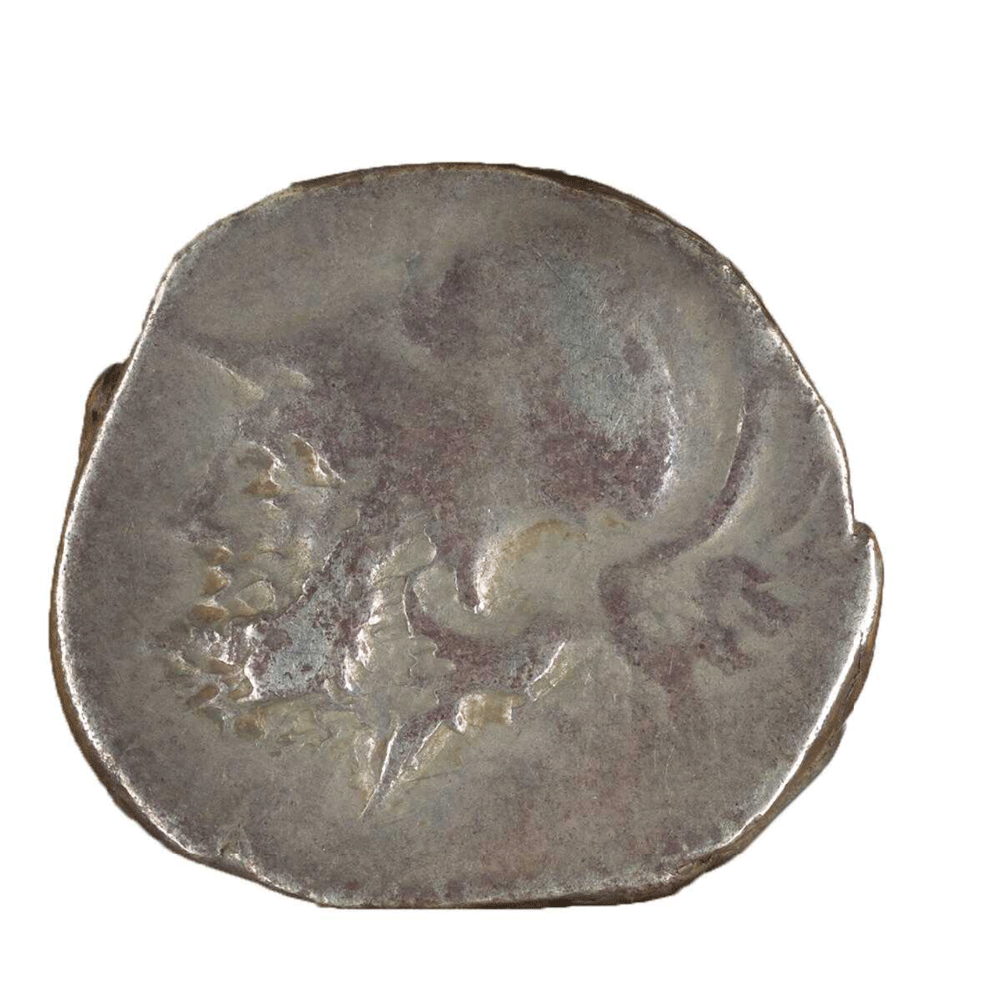 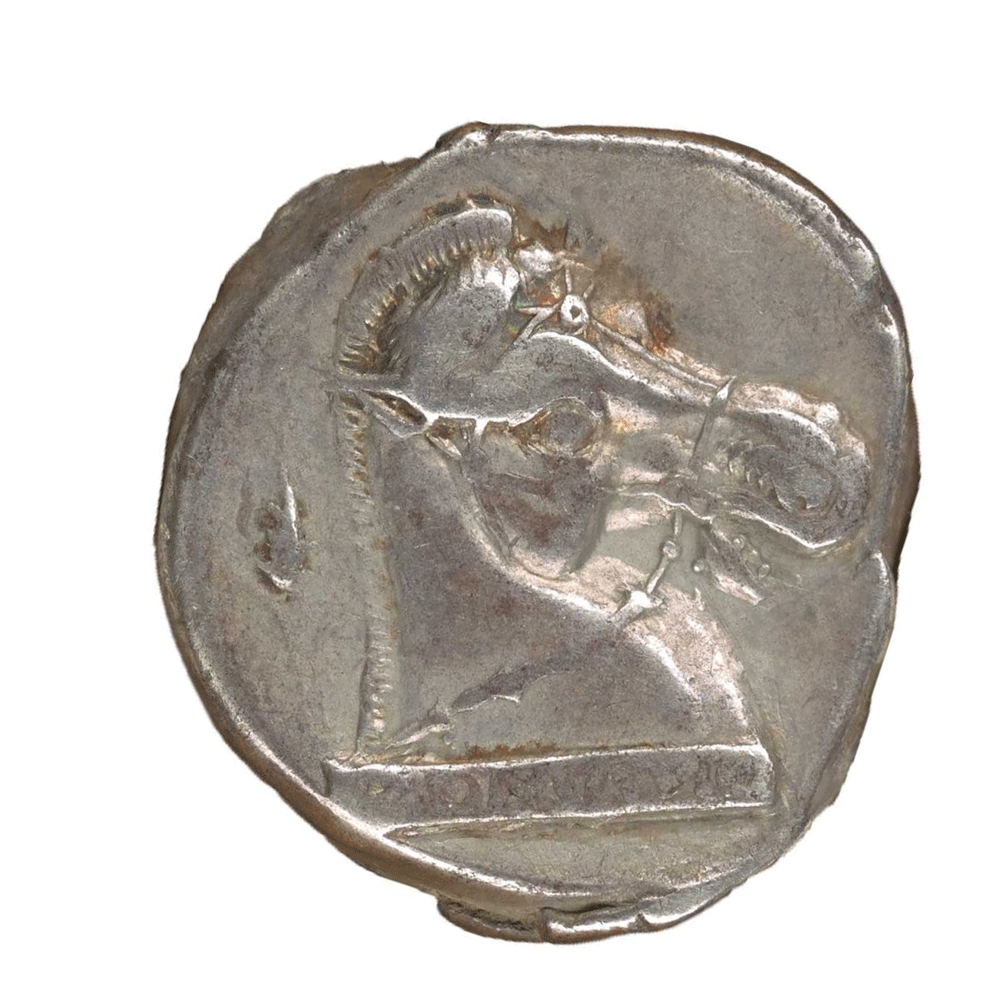 And here, the same coin, with images captured from the RTI file, with light source placed in different locations. 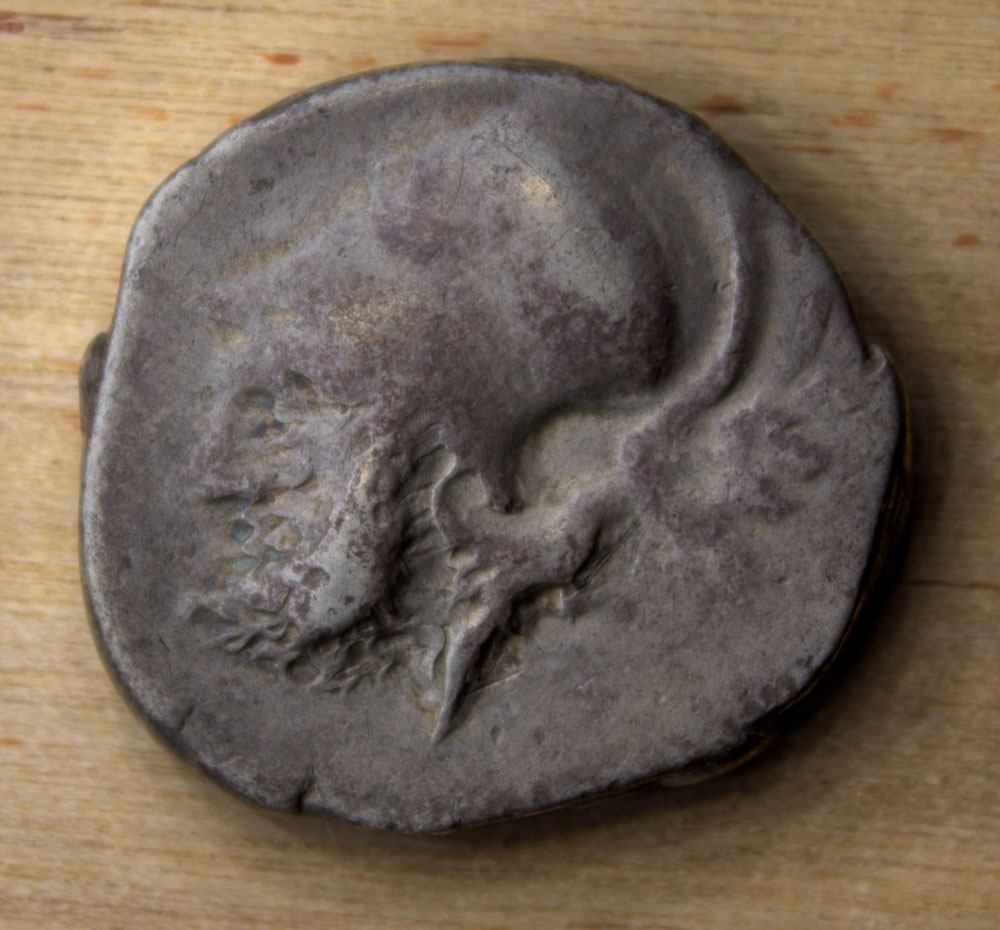 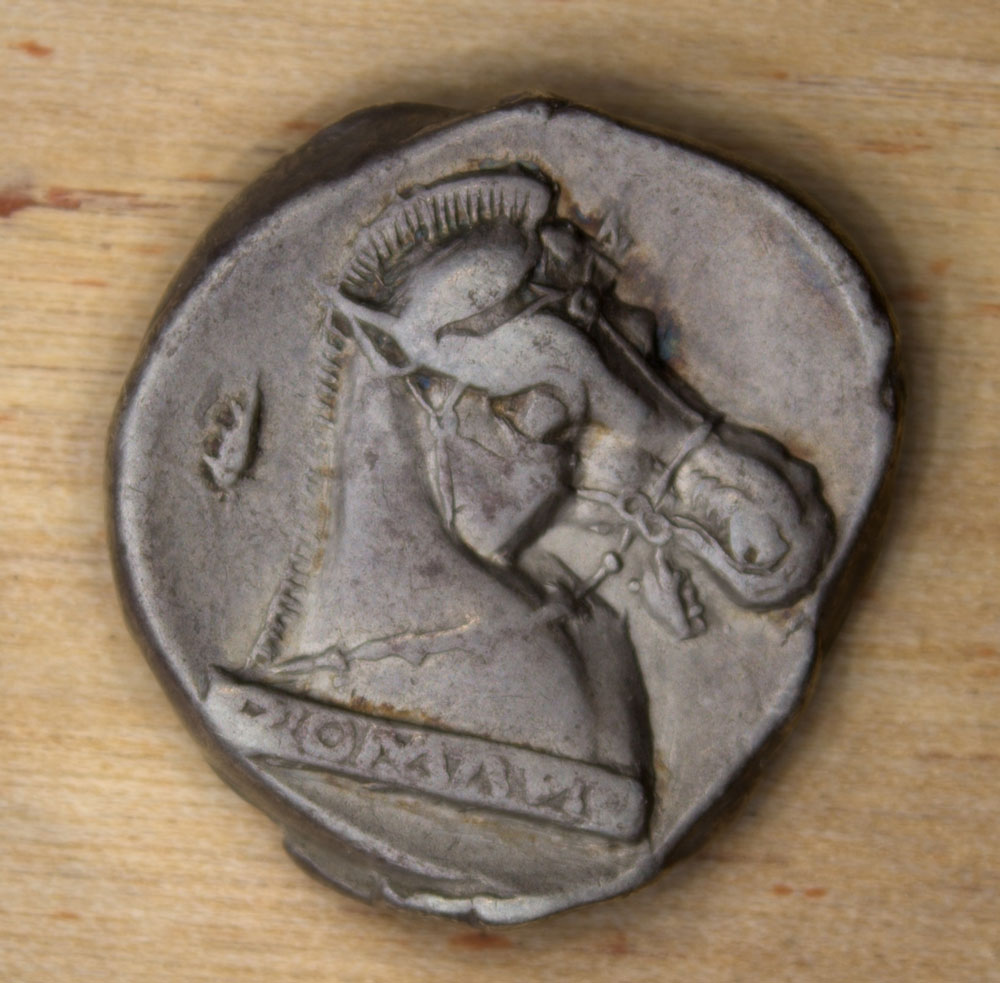 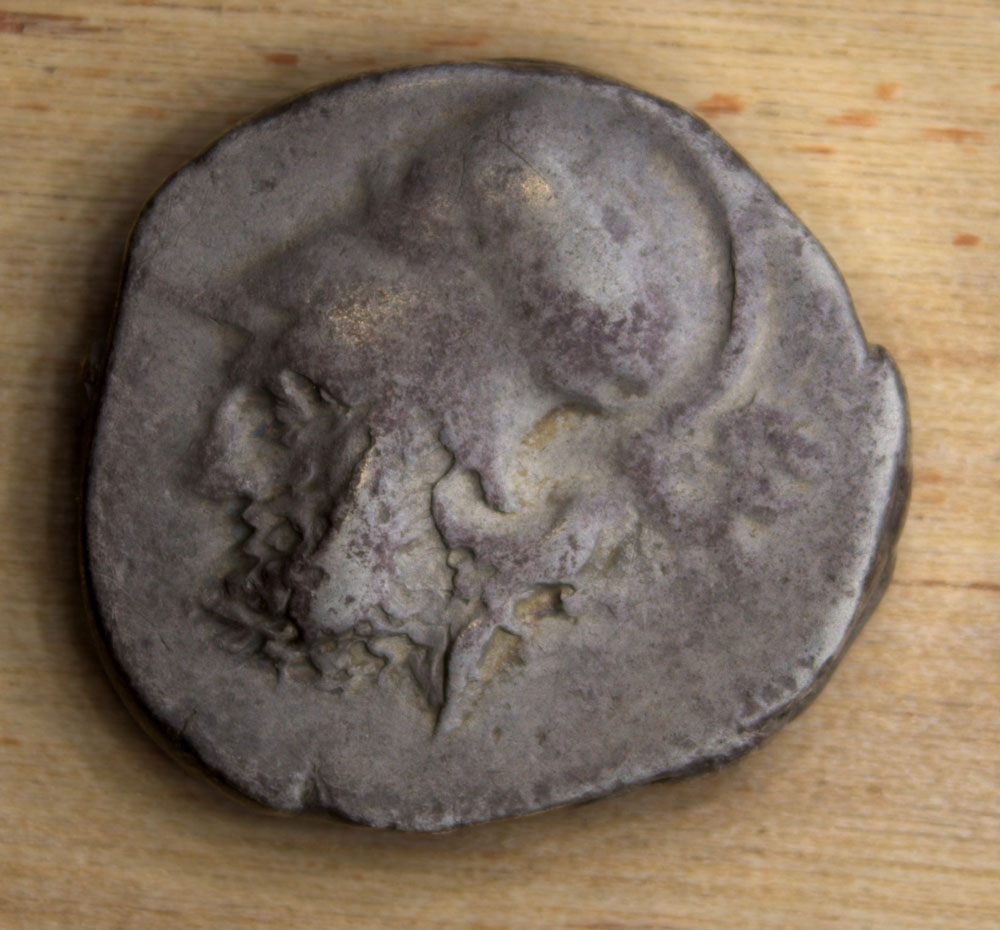 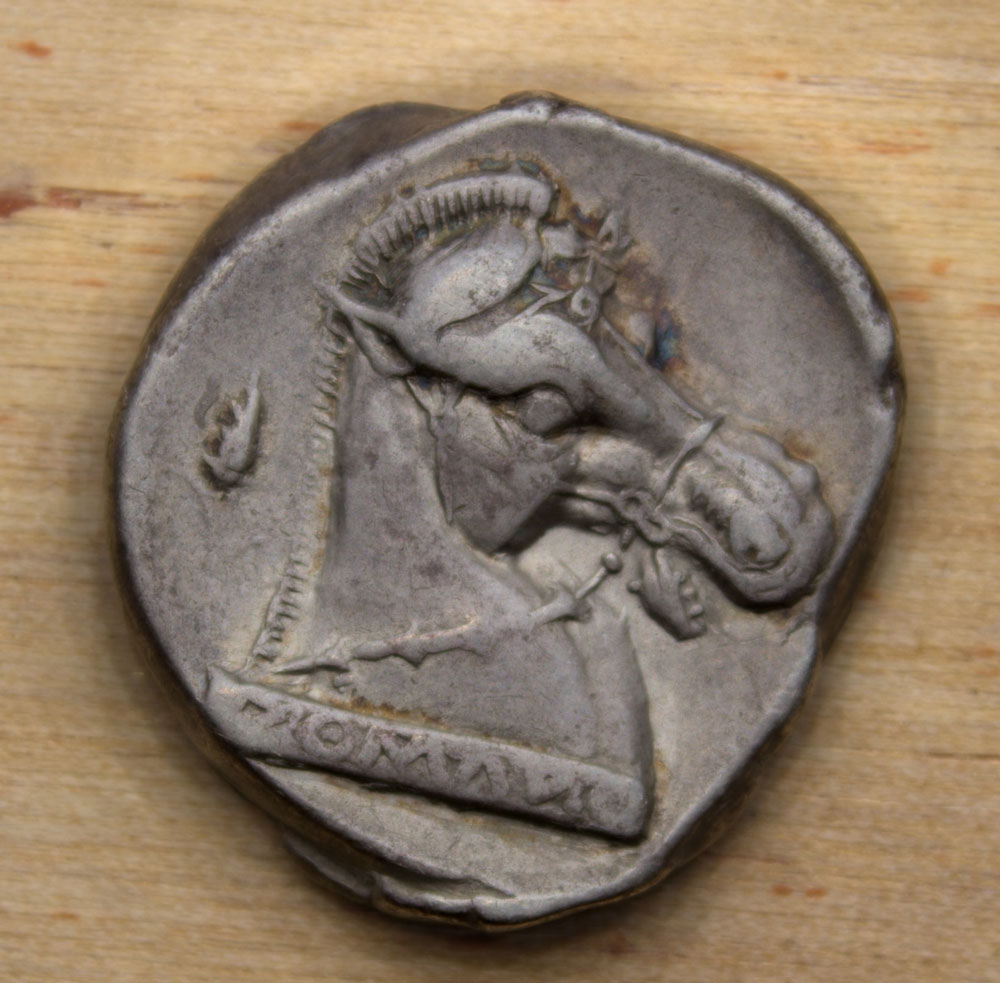 Considerable detail which is rather poorly represented in the static image, including the headgear and profile on the obverse and the legend on the reverse, are markedly clearer in the RTI rendering. 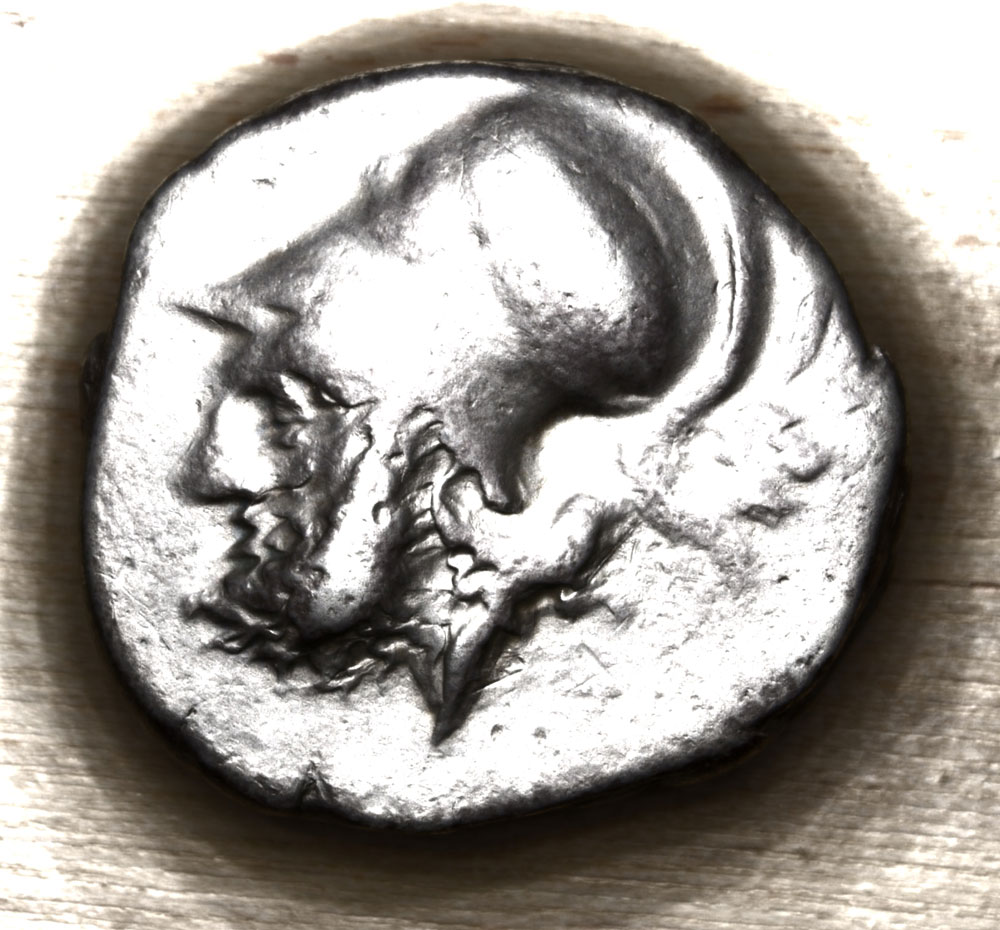 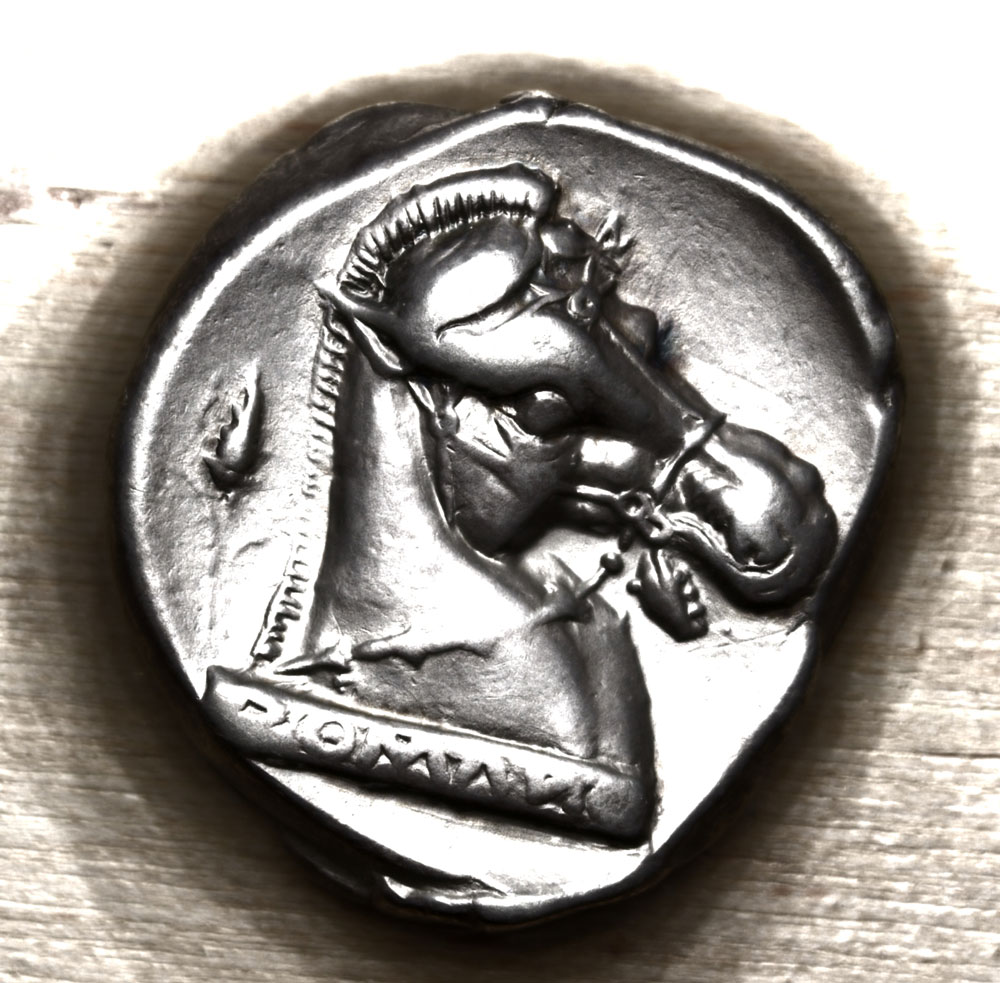 The user may also apply a normals visualization to the object, which is effectively a “depth map”, assigning RGB values to X, Y, and Z axis components to visually render depth information: 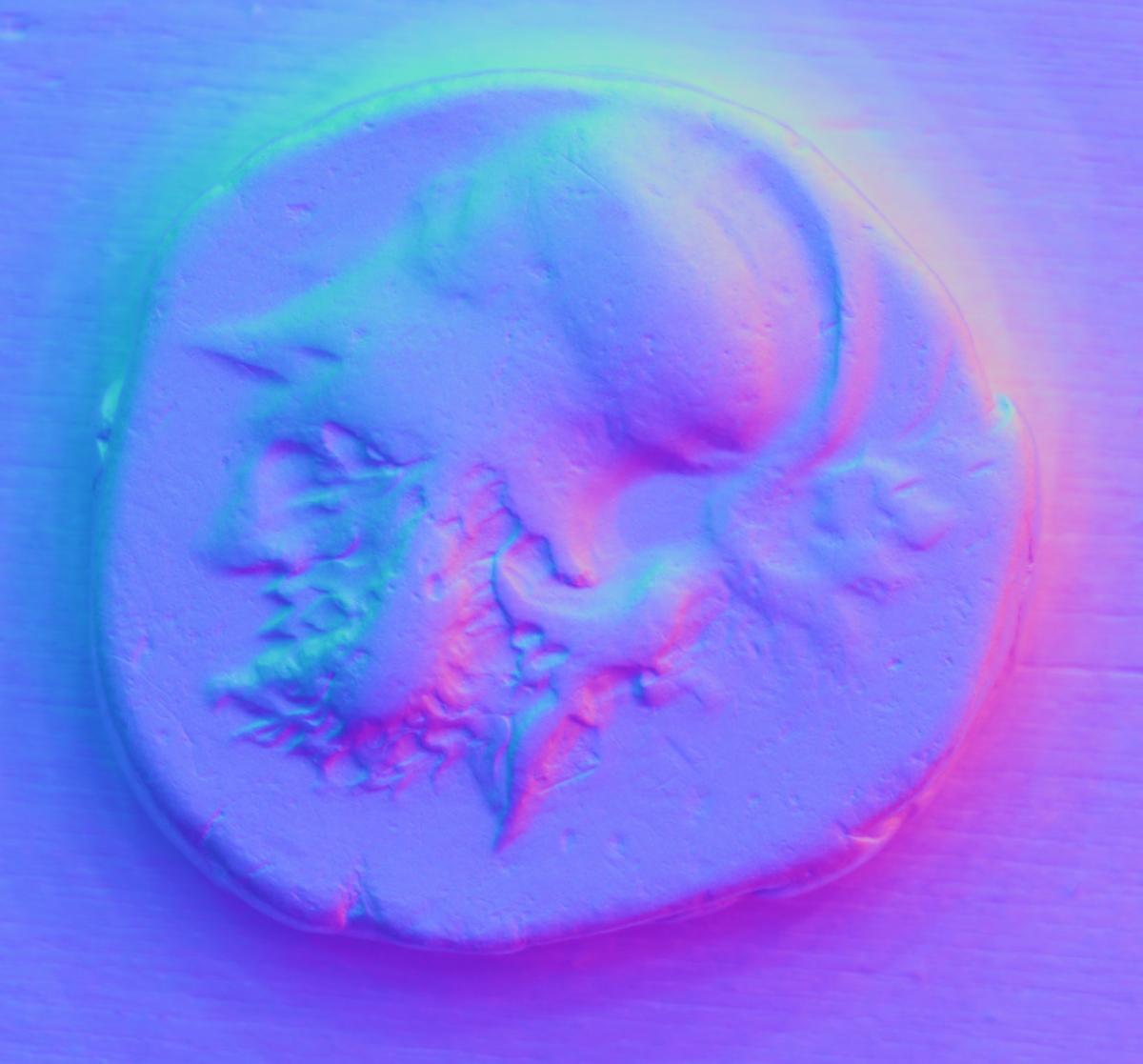 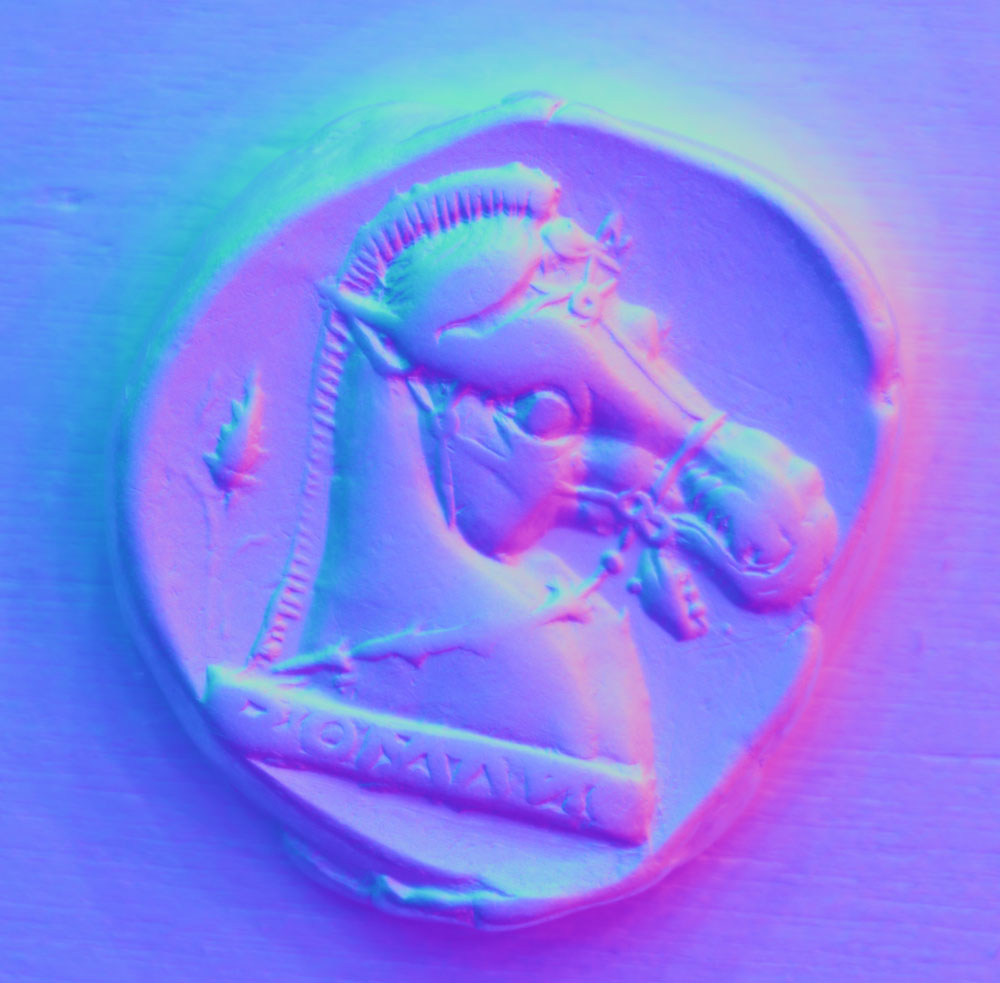 The links below will allow you to download the completed RTI files which this project produced. In order to view these files, you will also need to download and install RTIViewer. The program and its documentation are freely available for download from Cultural Heritage Imaging (CHI) here.

Below are links to the record for each coin for which RTI files were produced in this project. Files may be downloaded from the links in the left sidebar of each record. RTI file sizes are generally between 20 and 40 MB.